Oh, it has been a while since I have last graced these pages with my inane commentary. But fear not oh 5 readers! I am back!

At least until my coffee cup is drained, that is.

At the beginning of summer, I spoke a little about ceremony in this post about my youngest’s graduation from elementary school.

This theme of meaningful ceremony came up twice more this summer, during my trip to Victoria.

The first event occurred at a family barbecue. Now, okay, the actual family barbecue might be considered ceremony enough- the whole extended family packs into my mother’s small house. We all bring copious amounts of food and alcohol. One of the men mans the barbecue, grilling piece after piece of marinated meat.  The kids run around like maniacs and then inevitably settle in front of the TV. The adults mill around, making a stop at Grandma, interrupting a conversation with an uncle.

But no. This family barbecue was a little different. First of all, we were all supposed to dress up, apparently for family photos. I didn’t get the memo and showed up in a gross old tank top and faded skirt. Then I had a temper tantrum, because some sister-related complexes die hard and I perceived my two sisters whp were now not only way more good-looking than me, but now way better dressed.

Yes, I am ashamed of my pettiness.

My middle sister insisted on driving me to where my clothes were so I could change despite my protests (I felt ashamed of my outburst about two seconds after having it). So Now I was dressed up for the stupid family photos and in a bad mood.

So I am at the barbecue, sitting with my grandmother who is 94 and starting to lose her memory, when a scream comes from inside the house. Oh god! What is it now? Another temper tantrum?

Well, it turns out it was a marriage commissioner. My sister (the one who insisted on driving me and not letting me opt out of the party) and her fiancé Josh were getting married!

A surprise wedding! Which I think might be the only sane way to do it. They had managed to gather all the family (my other sister who lives in L.A. was also visiting) in one place.They had no best man or bridesmaids or ugly dresses or catering or all of the other stuff that goes in to planning a full blown wedding. What they had was their family, a marriage commissioner and a lovely garden in which to say the vows they had written themselves.

It cut straight to the heart of why people get married- a proclamation of mutual love in front of those who matter most. That night was bursting at the seams with love and joy- I swear even the stars shone brighter for my sister and her guy.

It was time to do it. 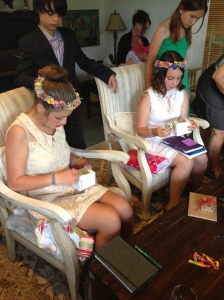 To begin, I emailed all the adults who would be present for the event and asked them to prepare a very brief speech on what they think it means to come of age- what does it mean to be an adult? I asked them to make this personal and reflect on the traits that have shaped their adult lives.

Here is my intro and how the ceremony actually worked:

Thank you all for coming. When S was in Grade seven, she did a project on coming of age ceremonies. She also had the opportunity to attend her friend’s Batmitvah. One night at dinner she asked me what our coming of age tradition was. I had no good answer. What is a secular household to do?

Though many of the old ceremonies are rooted in a valid need to celebrate the milestones in our life, they do not hold a lot of meaning for us anymore. We are in a unique position in history where we have the freedom to interpret these milestones however we want . We can make our own ceremony.

And that is why we are gathered here today, to celebrate the coming of age of S and T. I have asked the girls and all adults present to reflect on what it means to them to come of age, and what values they hope these girls will adopt and embody as they make the journey into adulthood.

I will ask S, then T to come up and say a few words. When they are finished I will call upon you all to give your personal interpretation of what it means to be an adult in the world. When you are done, I will ask you to take a ribbon and tie it on their left wrist, which I was told recently is the receiving hand. None of us come of age in a vacuum- it takes a community to raise you up, support you, guide you. You are Sylvie and Thea’s community- her mentors, her inspirations, her role models. The ribbon is a symbol of your love, support and guidance.

The girls were also given a rose by each speaker, so by the end their wrists were plastered with ribbon and their arms full of flowers.

When everyone had done their speeches, I closed the ceremony with this poem by Rudyard Kipling. Then the girls opened the symbolic gifts people had given them. Then we toasted them with prosecco and ate lasagna.

One thought on “My Summer of Ceremony”