This last Sunday I actually did something I set out to do.

I know, right? The mind boggles at the deliberateness of it all.

But let’s go back in time, to another deliberate act, shall we? The day of my 39th birthday in April, I signed up for the marathon. I did this both as a present to myself and as a way to thwart myself. Some would say the thwarting or the blocking of registration procrastinating was the real present.

Okay. This needs some explanation. I did my first marathon in 2008. I did it without real training except for the fact that I tend to run a lot though the farthest I had run was 21 k. So how hoard could a 42 km run be, right?

I expected to do it in under four hours because, growing up with a marathon runner as a mother, that is just what one does. One finishes running a marathon in under 4 hours. Didn’t your mother teach you that? Mine did.

To my shock and despair, it turns out that I was not such a good runner as I thought. It was hard. Real hard. I did everything wrong- for the first half I tried to keep pace with my friend who is about a foot taller than me and a better runner, but when she was going to speed it up at the 21k mark I had to let her go because I was almost done. Oh- and I didn’t help myself out either: I didn’t take any of the oranges offered nor did I drink anything but water, because I don’t drink that Gatorade crap, yo.

That was really stupid.

I did end up finishing it but my time was around 4:15 and I lost a good ten pounds during that run- not a healthy thing to do.

I did my second marathon in 2009. This time I actually trained- got myself up to doing 30 kms before the actual marathon. I did it alone so kept my pace and finished in grand style though still 8 minutes over the 4 hour mark. Every year since then I train for the marathon but hedge on the actual registration. What if I can’t do it? Do I really want to do it?  Why do I even want to do it? By the time I get up the nerve to go online and register the race has been sold out for about a month.

And of course, I have come to rely on my procrastination to get me out of actually having to run the race in the last few years.

But not this year! No! Why? Because I am turning forty in a few months and it turns out that I am not allowed to do that without running the godd*(&*^&*(^*&%^ing bloody marathon in the time that you are supposed to run it (which according to my family lore is under four hours.)

So 5am on the first day of my 39th year, I am online and registering. They accept my payment. I get a confirmation email.

Here are my (very good) reasons for NOT registering for the Marathon:

1. I run for myself. I don’t do it for kudos, or vanity. I don’t post my runs (usually- couldn’t help the last one) on Facebook nor do I talk about it too much (I hope).

2. I am not athletic- I have always been the A for Effort! gal in all sports endeavours. I have no problem with this. I accept it, even embrace it.  I have nothing to prove. Right?

3. People. I am not the only crazy motherrunner who likes to challenge themselves by running long distances. On the Jacques-cartier bridge last Sunday there were 18,000 runners. 14,000 of those were for the half-marathon and 4,000 for the full. That is a lot of people weighing down a bridge in Montreal (not so lauded for its stellar structural standards- I actually felt the ground  sway with all the pounding feet. It must have helped my time though, the adrenaline it gave me to get off of the damn bridge before it collapsed). Not only for taxing our already taxed infrastructure, I really don’t like crowds. I get panicky when there is too many people. Running for me is a pretty solitary endeavour and I really don’t relish the act of doing it with 17,999 other people.

So why? Why would I want to do that to myself? Why is it so important?

Honestly, I have no idea.

But I have some theories.

Why would I do a marathon?

Well, to start with, all of the reasons in the NOT section above.

1.I run marathons for myself. Because it makes me dig deep inside myself to find a strength I have ignored, or have denied existed. Believe me- this is as painful as it sounds. To find that strength I have to go to some dark,

cavernous, evil places inside me (think a mix of the Indiana Jones pit of snakes and the horror basement in the Silence of the Lambs. This is the breeding ground of the “you suck” voice in all its charming permutations. And trust me- those voices breed like freakin’ gremlins. So periodically I have to go down to that dark place and do some cleaning and find the strength buried under all the ugly creatures with razor-sharp teeth.

2. I am not athletic. But what I lack in athleticism I make up in pure stubbornness and I am learning to embrace my strengths.

3. People. As much as I don’t like crowds, it is also something to be surrounded by thousands of people who are simultaneously visiting their dark places and grappling with their gremlins. Where I stood on the bridge, surrounded by your average 4 hour-ish runner (not those crazy people at the beginning who actually think of a marathon as a race against other people, an idea that had not occurred to me until after my second marathon- that whoah- someone actually wins this thing and not only in the metaphorical sense), I saw a bunch of people looking inward. Some were nervous, some jittery, some very very quiet. It is something to see that many people push themselves out of their comfort zone.

4. Which brings me to my next point. Eleanor Roosevelt said , “Do one thing everyday that scares you.” The idea being that sometimes you really need to go outside of your comfort zone. And no, I am not talking about going to Domino’s instead of Pizza Pizza.

Marathons scare me. I never think I will be able to finish. I worry about being that poor sod who halfway through is limping and gasping for air and looks like they’ve just escaped from a prison camp in the Gobi desert (I don’t know if there are prison camps in the Gobi desert, but if someone ever escaped from one I bet they would look like a person getting their ass kicked by a marathon.) But when I actually finish, when I find that strength, something palpable changes within me. I have inched a little closer to being the person I want to be.

5. This feeling resonates. The marathon is a metaphor for the rest of my life, especially when it comes to my writing (Murakami made the same point in his book What I talk about when I talk about running). If I can slog through 4 hours of running, surely I can find the strength to finish a manuscript. Or get up in public and read my work (equally terrifying). Or be the patient, kind but firm parent I so hope to be.

Of course, the Oatmeal covered most of the real reasons (none of this metaphor crap): 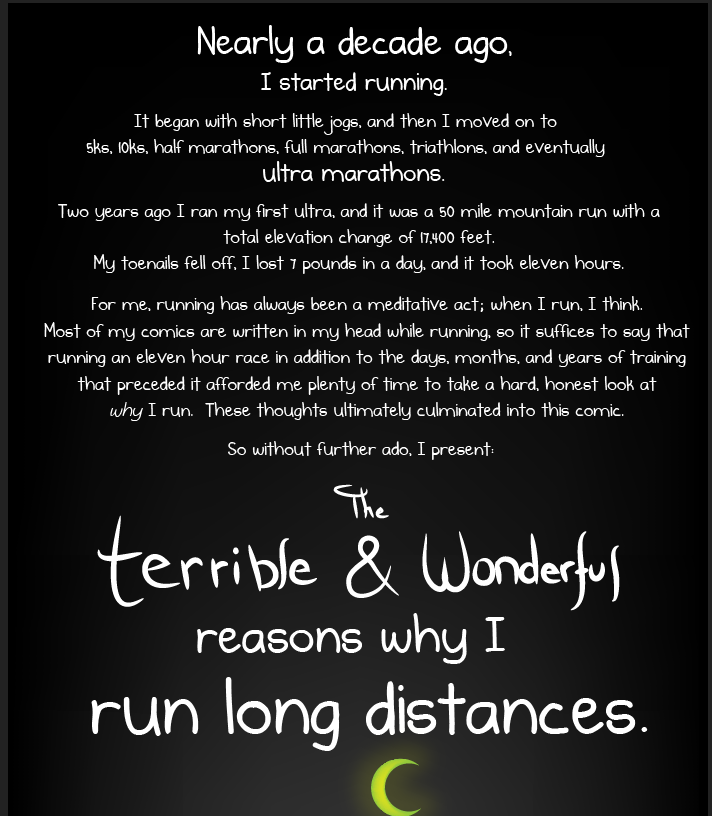 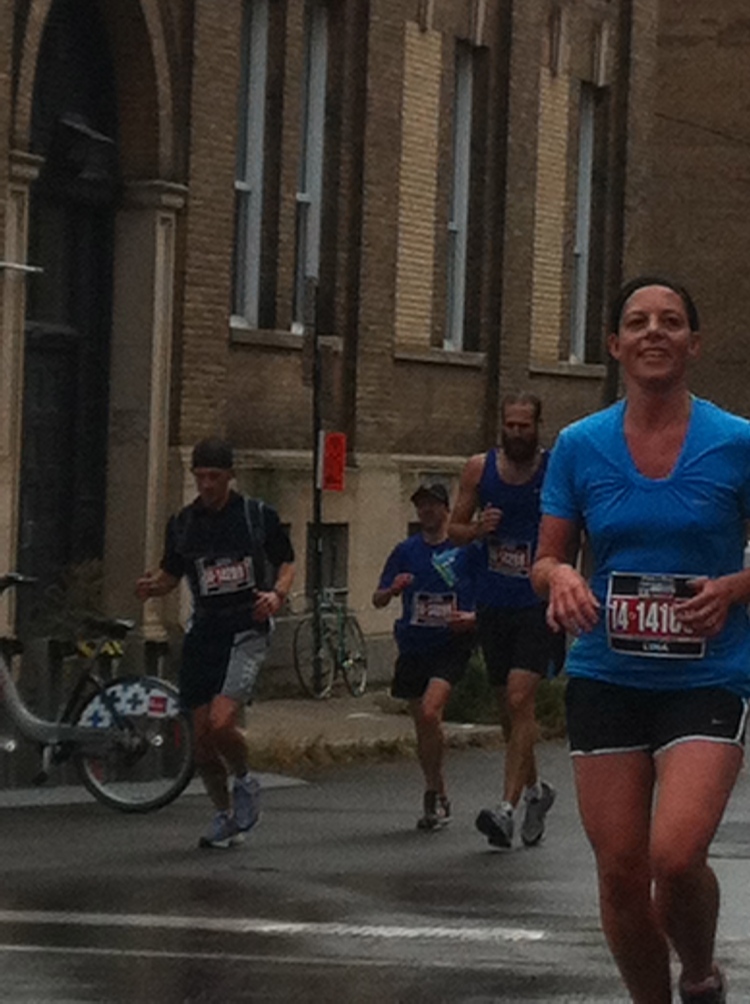 7 thoughts on “Marathon: my internal debate”