Present time
It is about twenty to nine and the kids are still in bed as well as the in-laws. I had book cub last night and got to see some of my favourite people (a side note here- steampunk zombie adventure novel although fun to read, do not provoke too much in-depth discussion) and I realize that time is a tickin’ with this travel journal. But before I begin, I would like to make a few general remarks:

Acknowledgments:
Thanks to our good friend Ruth for lending us all her Orlando documentation – books like the Unofficial Guide to Disney (although ours was a little out of date, it was still useful), and the Irreverent Guide to Disney World were invaluable in helping us plan our days. Thanks very much,Ruth! You rock! (But I still don’t know how you managed to go there with a 4 year old and baby twins. I think you might be insane).

This portion of the trip will mostly be photographs as I really have not much to say about amusement parks. Oh, who am I kidding? I always have lots to say. Thus begins the part of our trip that I equate to a voyage inside a surreal rabbit hole lined with gift shops. The whole purpose of the the place is to make you spend money. Oh, they throw in a few thrills now and then with a ride or two, but in the end, the thrill is never worth the hour’s wait in line. And yet, we do it anyway, and somehow manage to have fun despite the mob of people, the hot sun and the cheesy props.

Oh, and one last note. J commented how Universal studios and Disney world were really a homage to the scenic painter and props dudes the world over. It was like being in a gigantic theatre set the whole time, with each ride being a different scene.

So. To Islands of Adventure! 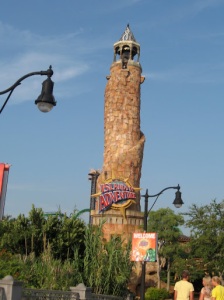 Here it is, people, Hogwarts! We left the hotel at about 8:00 am and walked the 20 minutes to the entrance of the park in order to get there early. They let us in about 20 minutes before the official park opening and shunted us to the left where we had to go through The Superheros Section, and Toon Lagoon to finally settle in a line in the Jurassic Park section for Harry Potter. 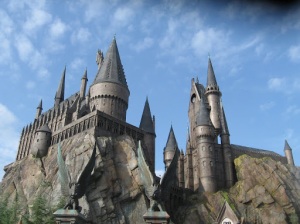 However, the line began moving quickly, and before long we were at Hogwarts! 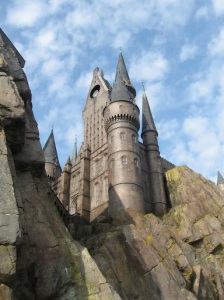 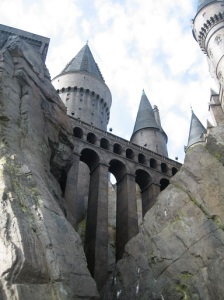 To get to the Forbidden Journey, one of the 3 rides in Harry Potter world, you go through the castle. The line winds its way through the greenhouses, where pitcher plants are hanging from the ceiling, and mandrakes are in locked cages. J was amazed at the incredibly well done scenic paint job in this place, where they made the greenhouse look rusty. Then into the castle, where you go past the entrance to Dumbledore’s office, 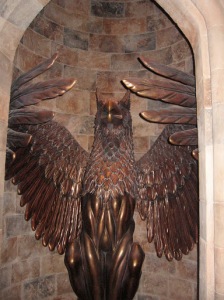 a hallway with moving pictures, 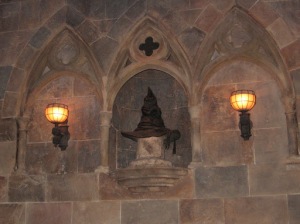 as well as Dumbledore’s office. We then enter a defense against the dark arts classroom where we meet holographs of Ron, Hermione and Harry who entreat us to skip Professor Binns class and come with them to see a quidditch match. Ron even makes it snow!

The ride itself is incredible. A sideways ride that uses a lot of optical illusions via large screens that make it feel like you are in the movie. Then you go into the Forbidden Forest where you get sprayed by large spiders, and meet dementors . Then down into the bowels of the school with the basilisk skeleton. We got off the ride and we were all blown away. It was by far the best one of the whole trip.

Right after the Forbidden Journey, we hopped on the Flight of the Hippogriff, which is a conventional little roller coaster, appropriate for smaller children. However, this is where you’ll find Hagrid’s cabin: 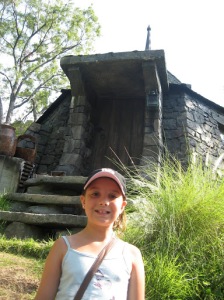 After The Flight of the Hippogriff we headed toward Hogsmeade and the ridiculously long line-up for Ollivanders. TIP: If you go to Harry Potter world in the next while, do this first. It was the longest line-up of our whole stay in amusement park land. And unless you are a big Harry Potter fan, you can probably skip this, as you are just lining up to get into a shop. Unfortunately, our whole family are big Harry Potter fans, and especially, for S, this was to be one of the highlights of the trip. So no skipping for us.

Ollivander’s wandshop. The line, the bloody line. Long, long line in the hot, hot sun. However, the one good thing about the line, was that it was all outside and easy to jump in and out if you had someone to save your place. So J and I took turns waiting while the other went exploring with the kids. The first stop for them, was to get some Butterbeer, which tasted like amix between cream soda and butterscotch. Truly delicious! 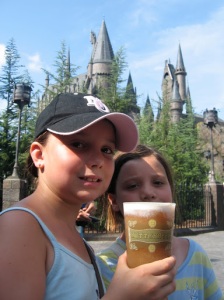 When J was waiting in line for us, the kids and I hopped into the Honeyduke’s line, which turned out to be the same entrance to Zonko’s joke shop. This wasn’t anything too spectacular – just like a regular candyshop with a few of the more famous Harry Potter candies – chocolate frogs, peppermint frogs, etc. 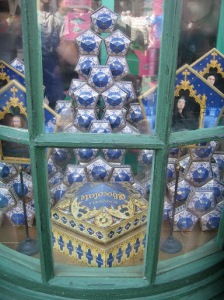 Then J went with the kids to see the Hogwarts express. Me? Still in line.

Finally! At around noon, we finally were herded in with about 15 other people into a shop about the size of our living room (but with higher ceilings):

The lights dimmed and once everybody was in the “show” began. Mr. Ollivander chose a boy from the group and began the whole wand choosing spiel. After he determined what his wand arm was, what his birthday was, etc. Thus began the process of trying out the wand. The boy gave one a swirl and tried out one. The sound of thunder roared through the room and Mr. Ollivander hastily chanted a spell to make it stop. Finally he gave the kid another wand, saying the classic, “I wonder…” and of course, a spotlight shines on the boy, there is a breeze and a chorus that I guess is supposed to sound like destiny and voilà! The wand chooses the boy. Then we are shunted from the shop into the extremely crowded giftshop. That’s it.

Sylvie’s face? Devastated. She was trying to keep it together, but disappointment could be read like a headline across her face. While we wre waiting for people to move out of the way so we could get into the giftshop (it was so crowded, we couldn’t fit through the door between the Ollivander shop and the gift shop) I finally plucked up the courage and spoke to the shop assistant waiting for us to get out of the way so that she could shut the door and let the next wave of people through. I told her we had a very disappointed girl who really wanted to have her wand choose her, and was wondering if we could be with the next group that came through the shop. She had a word with Mr. Ollivander and told us to come back in to his shop. She closed the door behind us and suddenly, we had our own private session with Mr. Ollivander! He took Sylvie through the whole thing, measuring her wand arm, asking her birthday and even trying out one wand. he told her to try a spell to water the flowers on the upper level. She gave it a swirl and chanted “aguamente” and the flowers died. He hastily repaired the damage and shook his head. “Definitely not, definitely not,” he muttered to himself. Then the “I wonder” scene. He picked up a wand and described it as having a unicorn hair core, for a girl with strength and charisma. She held it and the light came on, the destiny music and the slight breeze. Sylvie had her wand, and what could have been a very bad experience was turned into a magical one.

Then on to the rest of the park. But the rest of the day was kind of anti-climactic, so I won’t go into much detail. Suffice it to say, we stayed until around 7:30, got scared and splashed on the Jurassic River adventure, were entertained somewhat by Poseidon’s Fury (below)

Then took the Amazing spiderman ride which was like a protoype of the Forbidden Journey and then, to conclude a soaker on the 85 foot drop on the Dudley Do-Right’s Ripsaw falls.

Then back to the hotel for a swim and a pepperoni pizza and a very goodnight sleep.