Present time
We are home now in Montreal. Real coffee is brewing, J is making an egg and the girls are puttering around after a good night’s sleep in their own bed. The best part of a vacation should always be the coming home.

However, our present location just serves to highlight how far behind I am in our updates. So without further ado, here is the Pensacola to Orlando portion of our trip.

On the road to Pensacola
When we left New Orleans, we took a small highway that, on the map at least, looked like it skirted the Gulf of Mexico. Although most of the route led us along a wake of abandoned, waterlogged buildings, there were some great views.

Look at how close the water is to the road. I understand intellectually the idea of New Orleans being below sea level, but this sort of landscape brings it right home. 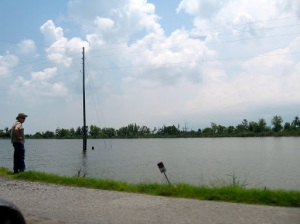 There were more scenes along this trip, but alas, they did not make J’s final cut. Houses on stilts, dense forest intermingling with water, were the highlights. However, it took us about 3 hours to go the distance equivalent to 1 hour on the highway, so we soon upgraded to the 10 east.

Florida and Pensacola
We arrived at the Florida border around 3:30 -4 pm and stopped at the Florida Visitor’s center. We were greeted with free cups of orange and grapefruit juice, and when we inquired about lodging in Pensacola we had two ladies who went above and beyond to find us the best rate possible. Kudos to those lovely ladies at the Florida welcome center right outside Pensacola! If you are in the neighborhood, go visit them. So armed, with a brochure from another hotel as proof of the price our hotel had to match, we headed to the brand, spanking new Country Inn and suites right off the 10.

A quick note here. I always wondered who stayed in all the hotels at the side of the highways. They always seemed like bunnies- multiplying exponentially, and outside of the city. Who actually stayed there? Answer: People like us. People who didn’t actually care about seeing the actual city, but who were just passing through. Or in the case of Pensacola, couldn’t afford staying at Pensacola beach (300$ a hotel room) and who needed to get back on the highway anyway. I am a total convert to the side of the highway hotel, with their free internet, complimentary breakfasts and pools. Not to mention HBO… Especially when found through hotwire or nice Florida ladies, when the price is severely discounted. Okay. Digression over.

We checked in, and then went straight back to the car, beach bag in hand, and drove the 20 minutes through Pensacola, and Gulf Breeze (Gulf Breeze, for the love of pete!) to Pensacola Beach. It must have been around 5:30 by the time we parked and got into our bathing suits. The sand in this area apparently is the whitest in the world, caused by quartz being ground in the rip tides and currents. While I was trying to find confirmation of this last statement (I get a little fuzzy about the details) I found this article about the oil spill a couple of weeks before we arrived at the exact beach. Needless to say, when we went swimming in these waters, there was no sign of the oil spill. The clean up crews must have done an amazing job.

But, even if there weren’t big globs of oil, there was an excess of slimy, green seaweed, that looked like it had been ripped apart by the tides. The kids went swimming anyway, as the waves were large and fun, but the excitement was muted by the fact that the seaweed got everywhere – in your hair, it would stick to your body, hide in the seems of your bathing suit.

A view of the beach with resort

Pelican in the sunset (taken from the bridge to Pensacola beach)

It was a little gross. We must have stayed about an hour, then spent another 20 minutes in the outdoor showers trying to get the slimy green stuff off us and out of our bathing suits. Then we headed back to the hotel and went for a swim in the waveless, slimeless, chlorine filled pool.

Pensacola to Tallahassee
The next day, rather then going back to the slimy beach, we headed east along the Gulf of Mexico National seashore, trying to find a good place to stop and check it out. The highway we were on was a narrow, two-lane road with water on both sides. White sand dunes with intermittent growth of reeds and shrubs framed the seashore. Pelicans, herons and other unidentified sand pipers flew around. 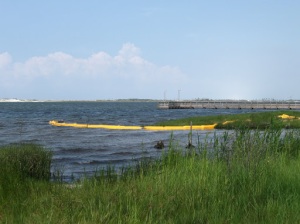 We finally stopped outside of Fort Walton Beach . Okay, “stopped” doesn’t quite describe the split second when I pointed to a patch that looked like a parking lot on the other side of the highway and Jeremy screeched on the brakes, then turned into oncoming traffic to come to a full stop in an unmarked lot looking onto a long narrow beach with hardly anyone on it.

You can’t really tell in the photos, but it was HOT. So hot, that I think we all got a bit of heat stroke. Still. It was beautiful, and the water so clear and warm, that we had to walk a little down the beach.
The girls, of course, couldn’t help themselves. Here is the first photo of them in the water:

Here is about five minutes after:

They jumped in clothes and all and swam alongside us as we walked along the sea shore. The sand felt so good between our toes, as if we were standing in soft brown sugar. Hermit crabs scurried away from us, and we walked along, looking at sea shells, and other interesting sea creatures.

Alas, we couldn’t stay very long as the heat was debilitating, so too soon we found ourselves back in the car with two soaked monkeys and a bit of a head ache from the sun.

Although some of it was very scenic, not all of it was. Especially the section around Panama city and all of its crazy beaches, which was a nightmare strip of high rise condo/beach resorts and hardly any public beach access. We wanted to find a place with a shaded picnic area, but couldn’t find one. We opted for the good ol’ fast food standby – Taco bell. We arrived in Tallahassee around 5 or 6 where we went directly to the hotel we reserved on the edge of town and by the highway we needed to take to get us to Orlando.

Cocoa Beach
The next morning we headed straight for Orlando on a strip of highway that bears no description.

Note: for the trip, I had downloaded The Hunger Games from Audible.com to give the audio book thing a try. It proved to be a godsend. We finished The Hunger Games on the trip to Tallahassee and I downloaded the sequel, Catching Fire, right away. When you first sign up to audible, you get 1 free audio book to try it out. It was great. The trick is to find a story that would interest everybody in the car, and voilà! You get about 12 hours of entertainment. Seriously. The kids hardly complained at all about being in the car, even on the days when we drove for 8 hours. I seriously recommend it for any travelling family.Or even for anybody travelling.

We arrived at about 2 pm in Orlando, but weren’t allowed to check in until 4, so we asked to unhelpful young girl at the visitor’s center where the closest beach was, as all the attractions in Orlando cost an exorbitant sum and well, we are cheap. She directed us to Cocoa Beach, which, she claimed was only a half hour away.

So I guess a half hour in Orlando time means 1 hour. After passing an excessive number of tolls on the beach parkway, passing Cape Canaveral and seeing NASA buildings in the distance, we finally arrived at Cocoa Beach and were told we need to pay 7 bucks to park.

Grumpily we paid, parked our car and ate our lunch on a picnic table by the car. This would be around 3pm right now, and hunger wasn’t helping our mood. But everything changed once we got on the beach. Clear, warm water with huge waves (not as big as Lake Michigan, but still) we thew our towels on the beach and ran into the water. 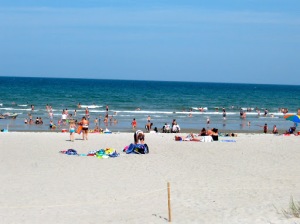 In the water, we saw a dead sea turtle. At first we thought it had a bag over its head, which made my heart sink into my stomach as I was standing on a crowded beach filled with people slathering themselves in suntan lotion and eating doritos and I felt like such a lowlife. Especially since the turtle was drawing a crowd, tittering at it and scaring each other with the dare of touching it and I felt like a vulture. However, it turned out that it wasn’t a bag on its head, because the turtle was headless. The white was just its rotting flesh from where some bigger creature had bitten it off. Phew. Somehow, that seemed infinitely better than a bag on its head.

We stayed in the water for over an hour, then headed back to the hotel where we would stay the next couple of nights and return after our Disney World expedition. For 50 dollars a night and walking distance to Universal Studios, the Days Inn was a pretty good deal.

The pool and the kids in front of our room

One thought on “Travel Journal: Entry #5”