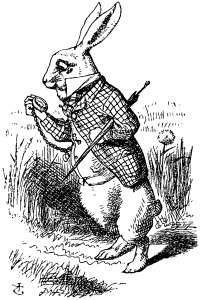 I was listening to the On Being podcast the other day and I heard a phrase that struck me the way a mallet hits a gong. It was one of the last interviews the poet and philosopher, John O’Donohue, gave before his untimely death in 2008. It is worth listening to and then listening to again, and not only for the melodic lilt of his Irish accent.

He was talking about time and presence and then said this: “Stress is a perverted relationship to time.”

And something inside me moved. It was a tectonic shift in my inner geology.

What if time wasn’t the problem? What if I was?

I had to sit down. The world spun around me like it must have when Alice fell down the rabbit hole, the way it does when one of my core assumptions is suddenly exposed as false.

Just a side note here, but I’m getting used to this feeling; it has happened a lot in the last few years. [Insert bemused face emoji here.]

But I don’t think that’s true. I only have to think back to childhood where I could easily spend a day in bed reading. I could let the hours stretch out like a lazy cat in the sunlight and not be worried about what I was NOT getting done, what I was NOT accomplishing. I could just be. Immerse myself in a story. Colour a picture. Put on a play with my sisters. I could still feel the vast horizon of hours, minutes and seconds that I somehow had to figure out what to do with.

I felt time as a benevolent presence, basked in it, and yes, sometimes felt like I was drowning in the glut of it.

I’m not sure when I began seeing time as my enemy. Perhaps adulthood with all its slowly creeping responsibilities, with the filling up of my days with necessary tasks and chores that leave so little space for anything else.

We complain these days about the over-structured lives of our children but they, in fact, mirror our own overly-structured lives. Most of us have rigid schedules to maintain; we get jobs that require our presence at a certain location and certain time for a certain number of hours every day. We have children that, we believe, require a rigorous schedule just to keep everybody fed and happy, where we feel their days must be scheduled the way ours are. We fear those unused hours of our children. We fear they might waste them if we do not control them. But that is a tangent for another post…

The vast river of hours I took for granted when I was younger slowed down to a trickle. There was not enough of it to go around, to get everything done. The once lush watershed slowly dried to a tiny trickle.

I was scared I would not have enough time to do everything I felt I had to do. And with fear and panic, comes the inevitable hate of the thing that makes you feel afraid and panicky.

What do you do with an enemy? You try to conquer it, of course. Colonize it, domesticate it. Make it conform to your rules.

And so began my war against time.

For the last 20 years I have been making myself sick trying to figure out how to live up to my responsibilities as a partner, a parent, a citizen of the world and lastly and very much least, to myself. I had a scarcity approach to my days. There was a limited amount of hours and by god, I was going to rigidly schedule all of them. I would imprison every minute by assigning it to the jail cell of a task. The amounts I took for myself, those 5 am mornings, were not really for myself but in service of my aggressive time colonization.

The idea of relaxing my vigilance sent a panic through me. If I was not doing something useful every moment of my day I was letting time win, I was letting it escape from the narrow confines of what I thought was possible to do. That time had escaped. It had gotten away from me. I would never get that time back.

I realize now how hard it must have been to live with me. The standards I set for myself and thus by proxy those around me were, well, exhausting and ultimately toxic.

It was only with that one sentence from John O’Donohue, that idea that stress is a manifestation of a perverted relationship to time, that I really understood what was wrong with the way I was approaching my life.

No that’s not true. I think maybe it was the straw on the proverbial camel’s back, the one piece of the puzzle I needed to have for the image to come into focus. Because I think I have been working towards this understanding the moment my life fell apart and I realized I could not go on with this sense of panic anymore, this frenzied activity to keep at bay, well, ultimately myself.

And really, my war with time was not really a war against time, but with myself. With letting myself be in the world. I concocted this war, this drought of hours in order to justify never giving myself any time. Time belonged to other people. To the imposing tower of “shoulds” in my life. But not to me. I was so scared that if I took a moment to open that door, all the neglected needs and desires, all the crap I stuffed into the closet of my heart, would come piling down and I would be buried.

Life hasn’t gotten any less busy. My days are still mostly occupied by work and then more work and then caretaking activities. But there has been a tectonic shift in me. It is like the pieces have come into place and I am no longer panicked by all the things I’ve not accomplished.

This has literally changed my life.

Of course, as always, it is a practise. I have a 20-year habit of anxiety around not using my time wisely or rationing it correctly. The panic and fear will rear their nasty little heads every time I am a bit late for work or if I dared to take a Sunday without doing all the chores before the week.

I have spent most of my life acting the white rabbit in Alice in Wonderland. Always in a hurry, always nervous about the dreaded queen of hearts and her penchant for beheading anyone that displeases her.

Well, I hereby, proclaim the queen is dead. And I, furry, little white rabbit that I am, have all the time in the world.

2 thoughts on “On my Toxic Relationship to Time”