This last couple of months have been fraught with literary activities. Here is a recap, beginning in October and ending last weekend:

This year the SCBWI Canada East conference took place in Montreal! Now, I love me a good writing conference, but the SCBWI have been far and away the most useful. This is my second time attending and I really appreciate how they provide a forum to meet the editors and agents of the big publishing houses and get your work read by them.

It is a great way to make contacts  as well as connect with the other lonely writerly souls.

Now, if only I could finish a darn manuscript so that I have something to send to one of these contacts…

Massey lectures: Blood: the Stuff of Life by Lawrence Hill

Then, on October 15th, I took my eldest daughter to see Lawrence Hill’s first Massey lecture on Blood. Now, FYI, you don’t need to read the book before you go listen to him. I did and realised that the book entitled Blood: the Stuff of life The Massey Lectures, was indeed, well, his actual Massey lecture.

Talk about being over prepared…

Once again, I attended this lovely event put on by my favourite bookstore (the one and only bookstore that brought Mr. Gaiman to speak in August, another great evening!).

Here is a nice account of it from Stephanie Noel. 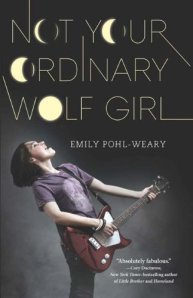 I read Pohl’s book after the launch-it was a quick but fun read about a young, upcoming, vegan musician who gets bit and has to deal with her new wolfy bit. Hilarious (sneaking ziplocks of meat into the restaurant bathroom) and action-packed, this is a nice new take on the werewolf genre. My only critique would be that the ending felt rushed and there were a few story threads that were not developed enough to my taste. But perhaps Pohl is setting the stage for a sequel? One can only hope.

FYI- one of my daughter’s friends had already picked up this book on her own and read it and loved it. So whatever my nitpicky adult criticisms, Pohl has her target audience hooked!

I know, I know. I said I would not do one again. But I never said never! I have been slogging through a manuscript that has been going nowhere for a few years now and I needed a break. Especially after I showed it to an agent at the SCBWI conference and she told me she loved the writing and was very engaged but would never be able to sell it as it was a dystopia.

So okay. I have had this idea in my head for a while- in fact I wrote a preliminary version of it for Nanowrimo a few years ago. But this time I thought I would use the month of October to make an outline and work on some meta data so I have a clearer idea of where I am going. This in the hope of having a more workable first draft than usual.

So how is it going?

Huh. I am making my word count no problem, but I fear that once again, what I have in quantity I might be lacking in quality…

Still, despite my very best efforts (and those of my characters) to get side tracked, I feel like I will have something I can work with by the end of the month. I plan on spending the months of December, January, February and March editing it, with a goal of having something to query before I turn 40. I know. Arbitrary, much?

But the 40 thing worked well for the marathon goal so why not with the novel-writing?

Nope. Don’t say anything. My hands are over my ears and I am singing lalalalalalal at your skepticism (ok, my skepticism…)

Launch of Monique Polak’s So Much it Hurts

Once again, I dragged my eldest daughter to another wonderful bookstore here in Montreal, Babar en Ville, for Monique Polak’s launch of her new book. I haven’t read it yet, but it is on my list!

Girls Night out at the Jewish Public Library with Lauren Oliver

Last but not least, last Sunday I took my daughters to the wonderful event put on by the Jewish Public library. Every year, they bring in a very popular YA author to speak to the girls. This year, Lauren Oliver, author of the Delirium series (featuring a heroine named Lena who is short and likes to run- just saying), spoke about how she was not a born a writer, but how she has been doing it everyday since she was 9. She told the girls of all her failed attempts, of how events in her daily life affected her writing. She was very frank and open about her own battle with depression and her personal tragedies. I for one was very engaged and moved, but more importantly, the girls in the audience were hanging on her every word. My own daughters loved it and came away with the very important message that you are not born able to do something- that anything worth doing takes practise. So amen Lauren Oliver!

And- though I was not able to attend the QWF Gala– a shout out to my friend Saleema for winning the QWF Paragraphe Hugh Maclennan Prize for Fiction  for her book Bone and Bread and my mentor Paul Bracegirdle (writing under Paul Blackwell) for winning the children and young adult literature award for his book Undercurrent!

Like Loading...
This entry was posted in A Day in the Life, Books, Inspiration, writing and tagged Literary events, Nanowrimo, SCBWI conference. Bookmark the permalink.