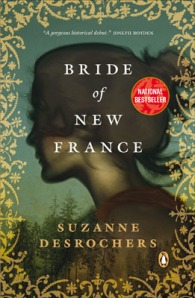 Laure Beauséjour was taken from her beggar parents by the Paris authorities when she was just seven years old and placed in the Salpêtrière, a catch all institute for poor, sick, mentally ill, or criminal women (and by criminal read prostitutes).  She was lucky enough to spend a few years as the serving girl of an elderly matron, who treated her as if she was her own daughter. The matron taught her to read, dressed her up in fancy clothes, doted on her. When the matron died, Laure found herself back in the Salpêtrière where she had to work her way up to the dorm of the bijoux, the model girls of the institute. there she works on her needlepoint and dreams of getting out and being a seamstress.

Her hopes are dashed when one of her dorm mates falls ill and dies. Laure, who never like the girl, is shaken to her core and writes a letter to the king to ask for better and more food for the girls. For her trouble she is sent on the next boat to Canada as a Fille du roi.

Desrochers has given us a historical novel with a capital H, with this glimpse into the before and after life of one of the poor girls shipped from France in order to populate the colony. Laure and all the other poor waifs from Paris were malnourished, uneducated and without any of the skills needed for their new life. Yet, the roughness of the new land is softened a little bit (not by much) by the new found freedom. There is nobody watching over her anymore- no superiors , no police, not even any of the old social norms that used to keep the women in place in the old world.  In Laure, Desrochers has painted us a picture of a young, bitter woman who was not happy with her lot in Paris and is definitely not happy to find herself in Canada, which rings true to my ears. Yet she survives and soldiers on even if she never really reconciles herself to her fate. The plot gathers speed when she gets to the new world and she meets a young native man who seems as between two worlds as herself. Yet, the new world has its own rules and Laure must follow them even if it goes against her own heart.

Did I enjoy this book? Yes, but…I am struggling to understand my own lukewarm reaction to it. Perhaps it is because, though Laure’s bitterness was understandable, it made it hard to empathise with her. I never felt directly affected by her plight, but more as if I was reading the Typical Trajectory of a Filles du Roi for social studies class. Though I found it interesting enough to keep reading,  all the visceral reactions you have when you are reading a good book were not there: I did not feel horrified when I should have felt horrified, I did not feel the terrible loneliness of her first winter though I know it was terribly lonely. I did not feel too bad or worried for Laure when she made her bad decisions.

Perhaps my humming and hawing comes from the fact that it probably would be a good compliment for a Social Studies Class. I just wish I liked it more than I did.