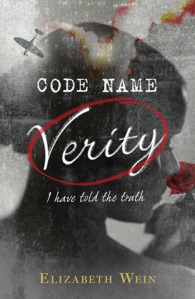 I read Code Name Verity by Elizabeth Wein right before the Christmas break so bear with me- my memory is worst than Lance Armstrong’s credibility (couldn’t help myself. Sorry.)

I think I am going to be lazy and just copy the description from amazon as I can’t figure out how to give a summary of this book without major spoilers:

Two young women from totally different backgrounds are thrown together during World War II: one a working-class girl from Manchester, the other a Scottish aristocrat, one a pilot, the other a wireless operator. Yet whenever their paths cross, they complement each other perfectly and before long become devoted friends. But then a vital mission goes wrong, and one of the friends has to bail out of a faulty plane over France. She is captured by the Gestapo and becomes a prisoner of war. The story begins in “Verity’s” own words, as she writes her account for her captors. amazon.ca

Code Name Verity is that rarity among rarities in Young Adult Fiction these days: it is a book about a friendship between women without any bullshit. They are not fighting over a guy. One does not become popular and leave the other behind. Neither is the other’s sidekick- Verity and Maddie are equally skilled in their different professions, they have equally strong personalities. There is no pettiness, no jealousy, no weird obsessions with each other. No need to spend every freaking moment together talking about asinine things (sorry. I obviously have a beef about how women friendships are portrayed in popular media).

But it is also a very well-researched, as historically-accurate-as-you-can-ask-fiction to-be story. Verity is a wireless operator who becomes a covert operative, and Maddie is a pilot – two jobs women were doing during WWII.

Part I is devoted to Verity’s confession after she gets caught in enemy territory. Her flippant, devil-may-care tone belies the very precarious situation she finds herself in and lulls the reader into a certain sense of complacency as she tells the story of her and Maddie. Although this section is entertaining it is really with Maddie’s version in Part two that the tension ramps up and the danger Verity is in (as well as Maddie- heck the whole freaking European continent) is really  felt.

Original in its format, topic and (unfortunately) in its portrayal of women friendship, this is an excellent addition to the canon of Young Adult WWII books.