Reflections on a cross-country train ride #3- Chicago to Montreal

Posted on September 1, 2011 by linabranter

Today is the first day of school for S and C so I guess it is high time I finish the trip posts. Combined with the need to prepare lunches again and think about a school uniform and forms to fill out, yesterday was an extremely wet and cold day, courtesy of the rear end of Hurricane Irene. The cousins were packing up and getting ready to leave (also today). The adults did groceries, folded clothes, baked stuff. The mood was quiet, grey, as if we were battening down the hatches, as if summer was over. And I gotta tell you, waking up at five again and writing this post, it is easy to convince myself that summer is long gone.

However. Here is proof that the elusive season was here and that we enjoyed ourselves. Last time I left you we had disembarked four hours later than we were supposed to in Chicago. Once off the train, we each of use hauled our large bags several long Chicago blocks to the hotel on Michigan Ave. What was the hotel called? I can’t remember right now, but it was a Grand old dame of a thing, without a swimming pool, but with large, spacious rooms with high ceilings and the original moulding. It looked a little like the old hotel in Barton Fink. Although we had booked the rooms weeks in advance, they still could not manage to have two rooms side by side. At first the young surly man who could give a crap at the desk told me that the rooms were in separate wings of the hotel. I told him that was unacceptable. He finally managed to get them on the same floor. However, our in-laws room had no view and I think was meant for people in wheel chairs (which wasn’t so bad- they actually had a walk-in closet).

An aside here: we noticed this last year, but the point was brought home in spades again in Chicago. Why is it that the more expensive the hotel, the ore you have to pay for the basics. I mean you get a three star hotel or a two star hotel like a Holiday Inn express and you get free use of the pool, exercise room, free wi-fi and a free breakfast. In a four star hotel, you look at the clerk wrong and you owe them ten bucks a second. It makes you want to stick with the generic brand.

Okay. Rant concluded. We continue with a selection of photos taken and hand-picked by artist Jeremy Gordaneer of the last bout of our journey. We had 24 hours in Chicago, so we had to make it count.

The first night in Chicago we went out to dinner at a chain place called Giordano’s (the place we went to get the deep dish pizza in March). By the time we got back to the hotel it was 11 and everyone was exhausted.

The next day I woke up a little earlier than everybody and had my first run since being on the train and I am glad to say my legs still worked. Chicago has a wonderful bike and walking path that spans its shoreline and this time I decided to go past the aquarium, past the stadium (Wrigley? Aren’t there two there?) and back.

By the time I got back, everybody was getting up and ready for the day. We ate breakfast at a little fast food place around the corner and decided to split up for the day. The girls decided to go visit the Shedd Aquarium, since it was such a big hit in March and the boys went to visit the Art Institute of Chicago. Now, do not infer any weird gender stuff here. The little boy wanted to see the armour section. One of the big boys is an artist and the other just likes the stuff. The adult ladies like it too, but also like weird fish. Who doesn’t, really?
However, on my run I pass the aquarium and noted that there was already a line-up at 8 in the morning (it doesn’t open until nine). When we arrived at around ten or eleven, the line up was circling the square in front of the museum. I couldn’t even imagine getting in before closing time.
So we sucked up our disappointment and headed toward the Field Museum of Natural History. Now, we all love the Field, but damn if they don’t gauge you at the door! The price of entry is steep and every special exhibition costs extra. So you have to make hard decisions between Horses, Whales or Bugs. We chose whales.
(You are probably wondering why there are no photos of this time. Well as mentioned above, these are selection of J’s photos and he was off looking at art. So no photos. )
The best part of the Field museum are the display cases with taxidermied animals in them or the even better displays with mounted skeletons. There is something about seeing all the weird types of Marmot or Gibbon that is extremely fascinating.
On our walk back to meet the other party, the girls and I came across a dance floor in the middle of the park. Every Saturday night in the summer, Chicago hosts a free dance party with live music. They were just setting up when we got there, but the sound system was blaring some funky soul music and C and M, the smallest of the bunch, couldn’t help themselves. They strode to the middle of the flat surface and started to shake their booty. I did join them for a dance or two and had the extreme pleasure of twirling on a surface made for twirling, without crashing into anybody and without caring what people thought of me. Would I have done it if I wasn’t with little kids? Probably not. One of the reasons I love having kids.

Okay. This thing deserves a little paragraph. There are two of these structures made out of glass blocks that project different faces on them. When we were in Chicago in March, they looked a little forlorn in their empty square of concrete. However, little did we know then that in the summer these large glass  faces spew water from their mouths and it is the weirdest, largest art/water park we have ever seen.

We met up with the others at our hotel (which for the life of me I can’t remember the name) then walked to the giant metal jelly bean featured so prominently in one of my blog posts in March. Then to a Pub (can’t remember the Pub’s name either, but I do remember good spinach pie and C got the most amazing root beer…) for some dinner and back to get our luggage for the walk to the train station for an overnight on Coach to Albany. Yep. Overnight.

A little note about getting on the train though. It’s a little cut throat. Unlike the plane, where people have assigned seating and people can wait patiently with the knowledge that they will be seated together, the train has no such nicety. To make it worse, there were a total of two bible camps wanting to get on board, and unlike good Christians, were extremely pushy.

However, I can be a tad aggressive when I want to be, and managed to use the “traveling with children” card (even though my children are quicker and more efficient than most of the adults I saw boarding) and we were able to get four seats together.

And yes. It was uncomfortable. The days of being able to sleep sitting up without too much fall out are far behind me (if they were ever there in the first place). Not to mention the discomfort of having a ten year sprawled across you,, fidgeting the whole time.

Still, it wasn;t that bad either. We all managed to get some sleep, and in the morning woke to some beautiful scenery and some more opportunities to read and doze. 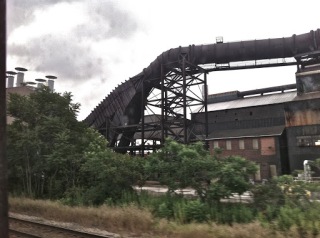 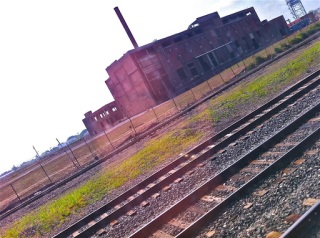 Albany. Not much to say, except we were gauged by the taxi driver who took us to the hotel. A five minute ride ended up costing twenty dollars, because as the taxi driver said, they charged us ‘by the person’. It was Sunday night when we got in so nothing was open. We found another pub, had hopefully our last greasy meal for the trip, and went back to our Holiday Inn Express to take advantage of the pool.

The next morning we boarded the train to Montreal. In a car, it takes about three hours to get from Albany to Montreal. In a train about eight. I am not sure how this adds up. Still, it was a beautiful ride through the mountains.

Thus concludes our cross-country train trip. My sister-in-law, who was supposed to take the train from Montreal to Chicago, then the Empire Builder back to Seattle, had to make alternative arrangements as all train trips were cancelled in the East due to Hurricane Irene. So I will leave you with one last word of advice- if you do plan on traveling by train, heed the natural disasters. They will but a wrench in your plans…