First of all, this freakin’ continent has got one large waistline. Unless you think of Central America as the waistline, then the whole of Americas looks more like Pamela Anderson – top heavy with a sleek Brazilian booty.

When we left Victoria, we took the clipper, a fancy katamaran that goes really fast and makes your stomach feel like you’ve been on a three-hour roller coaster (gravol recommended) to Seattle, with the intention of boarding a train to Chicago, as I think I mentioned in my previous post. Luckily I did take the gravol, as the trip through the Juan de Fuca strait was choppier than a speech by George Bush jr. Still, during the first part we went out on deck and watched Victoria recede in the distance. Then I went back down to our seats and in an effort to ignore my queasiness slept a lot of the way.

Then came the grueling walk from the clipper dock with all of our suitcases and our whiny children up steep hills to the Warwick hotel on 4th. We arrived like a sweaty herd of elephants in the lobby, only to hear by the surly witch at the desk that our rooms were not ready, and that we could not check in until they were. However, they soon changed their mind about our room readiness when they saw how much luggage we had to store.

But! But first! In one of those miraculous moments when the universe aligns, we were able to meet our friend Julian who now lives in Portugal. He was on his way to Victoria for a sister’s wedding and was only in Seattle for one night. It just so happened to be the one night we were in Seattle. Julian met us at our hotel with his friend and off we scampered, a merry group of ten, to explore the streets of Seattle.

Of course, the first thing I did was drag everyone to the Seattle Public Library. Everyone meaning, four kids (two of them mine, the others my niece and nephew) my sister-in-law, brother-in-law, J, Julian and his friend, resident of Seattle who probably had already seen the library. Still. It was important. It is the mothership, the home of Nancy Pearl, the most famousest librarian ever. And it is new and fancy.

The inside is large and spacious and doesn’t feel cramped like many libraries. The shelves are a distance apart with a lot of space on them. The non-fiction section is a spiral that gradually spans a few floors (I can’t remember how many right now). It is like being inside a snail shell. The view from the top is extraordinary and a little dizzying. The one thing that confused me a little was the YA section, which seemed kind of thin. Was it an afterthought I wonder? If anyone knows, please comment. The one thing I did see n the YA section that intrigued my geeky little librarian heart, was that they shelved the audiobooks with the regular books. They didn’t do this for that adult sections or the kids sections. Hmmm. Is it because they want to make it as easy and give as many points of access to books as possible? Is it to help the teens who find it easier to listen to the book and follow along with the print, or who only pick up the print copy after they’ve been hooked on the audio copy?  Very intriguing.

After the library we separated from the in-laws and children and went to indulge in happy hour at a cocktail lounge across from the library called Sazerac. Yes! For all fans of the HBO series Treme, that is the drink Chef throws in the face of the food critic who dissed New Orleans cuisine. The food critic wipes some of it off his face, tastes it and says, “Nobody throws a Sazerac!”

Which, of course, meant that I had to try a freakin’ Sazerac drink. Here is how Wikipedia says it should be prepared:

According to the Sazerac Company of New Orleans, the modern day Sazerac Cocktail recipe calls for 1 cube of sugar, 11⁄2 ounces of Sazerac Rye Whiskey, 1/4 ounce of Herbsaint, 3 dashes of Peychaud’s Bitters and a lemon peel. One Old Fashioned glass is packed with ice. In a second Old Fashioned glass, a sugar cube and 3 dashes of Peychaud’s Bitters are muddled. The rye whiskey is then added to the sugar/bitters mixture. The ice is emptied from the first Old Fashioned glass and the Herbsaint is poured into the glass and swirled to coat the sides of the glass. Any excess Herbsaint is discarded. The rye/sugar/bitters mixture is then poured into the Herbsaint coated glass and the glass is garnished with a lemon peel. Wikipedia

It was delicious. Like, way over the top, a party in my mouth, delicious. You could still taste the smoky edge of the whiskey, but it was definitely getting friendly with the other ingredients. I can see why it is not used to throw angrily in people’s face. It is too good.

But moving right along…. We left Julian and his very friendly, whiskey connoisseur friend Matt who had other plans, and went to soak up the alcohol with some Mexican food at Mama’s Mexican Kitchen, where we had huge black bean burritos and enough chips and guacamole to even satisfy me ( and I like my chips and guacamole).

When we arrived back at the hotel, the kids were still in the pool so we hurried and joined them. A swim, a sauna and a some Finding Nemo on TV was the perfect end to the day.

The next day, I set out for a short run before everyone woke up. It was a short run, that took me past the space needle, the science center, and other large institutions, then through some residential areas. Of course, the weather was grey and rainy. Westcoast.

After everyone was packed, donuted, and interneted (wifi cost too much at the hotel) we checked out, stored our bags and went to explore the city.

First stop: Pike Place Market, where I got myself an awesome crumpet with almond butter and honey for breakfast and one of Seattle’s famous coffee.

It was right around the corner from Left Bank Books, a collectively owned anarchist book shop.

We roamed around the market for a while, then headed toward Pioneer Square, stopping at toy stores, and book stores along the way. 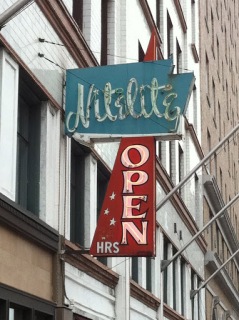 Of course, lunch had to be had. So we back tracked a little, went up the hill and alit at this very large brewery which for the life of me I can’t remember the name. Not memorable, except for the fact that all children chose the vegetable side dish instead of fries. That was weird.

Our train was leaving at 4:30, so we wanted to be there about an hour before. King street station is undergoing some renovations right now, and just recently got rid of an ugly drop ceiling that was covering up this:

Although beautiful, the effect was a little creepy as many wires were still hanging down from the ornate ceiling, giving the effect of an old, beautiful torture chamber. It didn’t help that this was one of the settings for the evil scientist in Cherie Priest’s Bone Shaker.

Stay tuned for the next episode of the Great American train journey where we actually ride the train. Featuring a selection of J’s 800 photos he took from the window, some musings on sitting there for two days, train food, close quarters and no exercise. Will she crack under pressure? Stay tuned, folks, stay tuned…