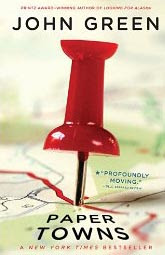 Paper Towns by John Green
Another YA novel by the smart and witty John Green. This book follows the same pattern I outlined in my previous book post – slightly geeky, non-ambitious, don’t rock the boat guy vs. uber complicated, beautiful and popular girl. In Paper Towns, our anti-hero has been in love with his charismatic yet difficult neighbour Margo for many, many years. Margo chafes at her sedate suburban life, with its sedate suburban expectations and therefore seeks adventures that lead her into the extraordinary and of course, into trouble. After a night of strategically planned vengeance on those she feels deserves it, in which she unexpectedly involves our hero, Quentin, she disappears. Quentin believes she has left him clues to her whereabouts and he determines to find her, leaving the sheltered boundaries of his comfortable world and discovering that people are not who you thought they were – they are a lot less and a lot more.

Margo is hard to like, but isn’t that usually the case with self-involved, smart teenagers who are dissatisfied and tend toward saucy? She is also completely human, and flawed and you hope the best for her. Quentin is a little too perfect in his nice guy ways. Still as a book that has a simple goal in my mind, to remind us that people are never what they seem, it works well. Although I was way more moved by Looking for Alaska, Paper Towns is still worth picking up. The Sweetness at the Bottom of the Pie by Alan Bradley

The first sentence at the back of this book reads like this: Meet Flavia de Luce, an eleven year old with a passion for poisons. Now how can you not pick this book up?
Sweetness is a murder mystery set in 1950s rural England with Flavia as our intrepid detective. Although her voice is witty, sardonic and hilarious, it is also completely unrealistic for an eleven-year-old. But why does it need to be?And how can we know this? Maybe there is an eleven-year old in this world who is that up in her chemistry and can quote Shakespeare and Euripides. You never know…
The cast of characters although eccentric are not caricatures: Flavia has two older sisters, one obsessed with her appearance, the other obsessed with books. Her father, a gentleman widower and ex-military men, lives for his stamp collection. The gardener served in the army with the father and came back broken. The detective on the case functions a little bit like Lestrade to Flavia’s Holmes. The murder itself seems secondary to this rich bunch of people. However, if you are looking for something light yet still smart and witty, this would be a good choice.

In the author’s own words, this book is about a “sexually transmitted city.”
Yeah.
One of the weirdest, most beautiful, hard to comprehend books I’ve read in a long time. The story follows four people in different parts of the planet who come to the gates of Palimpsest at the same time. To do this, they have sex with someone who has a a bit of the city that grew like a rash on a part of their body and which our four characters will also sport now. The gates are the store of a Frog woman, where she gives them an ink foot bath. I could go on but it just gets weirder and weirder. Valente’s prose is a tangled jungle of metaphor and imagery, the kind where it is really easy to get lost in (in a good and bad way).

The sections where she describes the city are so dense I could hardly understand them, although it was worth while slogging through the metaphorical foliage. However, the sections where she describes the desperation and grief of her four characters and their need to get back to the city were poignant. Through all its fantastic, brightly-coloured plumes of prose, the core of this novel is stark loneliness and our all-too human desire for elusive connection. It is worth a read as long as you don’t mind purple, all be-it masterfully done prose.

The Thirteenth Tale by Diane Setterfield

This book is one that sits on my library shelf and that I have been passing by for a while now, intrigued. Well, the time came to ignore my large pile of books to read that looms behind my computer like a literary cliff and pick it up. To my intense happy astonishment, it was the perfect book for my deeply irritated, February mood. This passage will describe why:

I read old books. The reason is simple: I prefer proper endings. Marriages and deaths, noble sacrifices and miraculous restorations, tragic separations and unhoped-for reunions, great falls and dreams fulfilled; in my view, constitute an ending worth the wait. They should come after adventures, perils, dangers and dilemmas, and wind everything up nice and neatly.

A young woman who lives a very quiet life, taking care of the books in her father’s book store, penning the occasional biography of obscure historical characters, receives a letter from the most famous, most enigmatic writer of the day. Known for her tall tales about her past, she is dying and wants to tell her story to our quiet young woman. What follows is a gothic tale of madness, fallen nobility and sibling love. I couldn’t put it down. A great vacation read for the times where you are craving a plot rich meal without the fat.