Grade Six Graduation: How it should be

Clea on her last day of elementary school

For most of us living in secular North America, there are very few ceremonies that mean anything to us. If you are not religious you do not have a coming of age ritual. Weddings are fewer and far between and hopefully funerals are the same.

So what do we have? We have the milestones set out by our society such as graduation. This past Thursday I attended the small graduation evening of my daughter who is graduating from elementary school.

Do you remember graduating from elementary school? I don’t. I don’t think it was a thing until recently. One just left elementary after grade seven (which was back in the day before the advent of middle school in our part of the world) and the next year you were in a new building with very large kids.

But apparently elementary graduation has begun to rival its high school counterpart in pomp and circumstance and all requisite grooming and partying. Which seems insane to me. A couple of weeks ago I got a phone call from a bemused friend asking me whether I, as the mother of a twelve-year old graduate, thought she should accede to the insistent request of her niece to attend her graduation, even though it meant her husband had to take the day off work, that they had to rent a car and that they had already sent the present and would be seeing them in a couple of weeks. Then, talking to my colleague whose husband works in an elementary school in Laval, she told me they had the graduation at a hotel and it was catered and all the boys were in suits ans the girls in fancy dresses with their hair done.

Ummm. Did everybody decide to buy a ticket and hop on board the crazy train? Is this what ceremony is? A chance to dress up in scratchy uncomfortable clothing and sit on uncomfortable seats to listen to some windbags talk about your future?

Luckily, no. The ceremony for my daughter was held in her classroom. Her teacher moved all the desks away and set up chairs for the parents, yoga blocks in front for the siblings and then facing the parents, a row of seats for the grade sixes. My friend bought some beautiful cakes from this wonderful local bakery Cocoa Locale and we set them on the table for later. Put the lemonade and soda water on ice and then took our seats.

The grade six class wandered in and took their seats in front. Most were in shorts and t-shirts. Some were in sundresses. My own daughter, having just located the missing summer clothes from last year, was wearing a hand me down dress from her cousin, which was so short now it has to be reclassified as a top. She wore her jean shorts underneath and her blue converse. I was lucky to get her to have a shower the night before, let alone go to the hair dresser (though she did go cash in a gift certificate with her friend for a manicure before the event- electric blue nail polish with daisies stencilled on the thumbs).

The room quieted down and the teacher picked a name from the pile of certificates beside her. Once their name was called, they got up and read a little speech that highlighted what they remembered most of their 6 years at the school (our little alternative school had no kindergarten when they started but most of them also spent that year together). Apparently the teacher had given them hours to work on their speeches in class and they were able to have a space to hone their collective memory. There was a lot of laughter and tears as the kids remembered their time together.

And for the first time I realised that this is a coming of age, almost more important than high school. These kids spent 6 to 7 years out of their 12 together. They have seen each other almost everyday. They grew up together and now they are all going their separate ways.

Sometimes I am a little slow on the uptake.

Once a student had given their speech, a grade five student would then get up and read a short speech about the grade sixer- their best qualities, what they brought to the class, their impact on the younger student. Then they would offer their hand-written, decorated speech to the grade sixer.

The teacher would then give them a certificate she made herself and hug the student.

After the speeches, we had cake and wine and drank and talked among ourselves for the last time at the school.

It was a simple ceremony that was all about the kids- the content was created by the kids, it was addressed to their classmates and it was just as much a commemoration of their time as a collective, gentle push out of the school. It ended our days at that school on a beautiful note.

The traditional end of the year party for the whole school happened the next night. Now, there is this weird and wonderful tradition we do each year: All of the parents and the kids from the whole school form a large, winding tunnel. Each grade six must crawl through the whole thing, their name being chanted and the parents and kids who know them trying to impede their progress by dipping down with their interlocked fingers or tickling them. But at the end, they emerge from this long tunnel with the imprint of the hands of all these people who love them and wish them well on their backs. 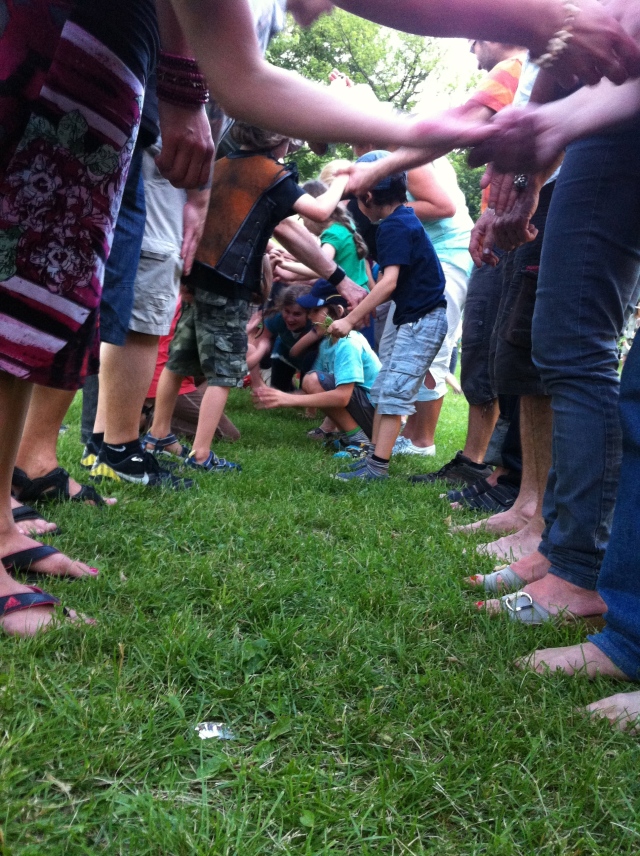 Like Loading...
This entry was posted in A Day in the Life, Inspiration and tagged coming of age, graduation, school. Bookmark the permalink.

2 Responses to Grade Six Graduation: How it should be