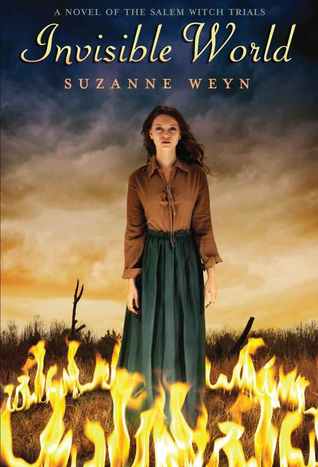 It is rare that I give a completely negative review. However, it is also rare that I read a book as bad as this one. I think it deserves to be talked about as it illustrates many of the Do Nots that I try to avoid in my own writing. I am also helping a young student edit her book for an independent project. The same mistakes I see in her manuscript I see in spades in this book.

To give you an idea of the absolutely insane plot:

Set in the 17th century, Weyn takes us from England where we meet our protagonist, Elsabeth, who can read minds, to America so she can try to read the minds of the “animalcules” (cells) the inventor of the microscope had just discovered (why they need to go to the Americas is never fully revealed). Their ship crashes in the Bermuda triangle and she floats in a barrel to an island where she meets a slave and falls in love with him. She lives with the slaves where she is taught magic by a formidable African woman until the owners get back and find her and ship her as an indentured servant to Massachusetts. She brings an evil with her from the Bermuda triangle and that  causes the witch trials. She saves the day by astral projecting with her governess and by the prayer of her catholic friend who calls on Teresa of Avila to come help as well as a native shaman. It tidily wraps up by having a native Indian come and ask her and her slave love and her catholic friend and weary governess to go live with them.

Yep. I am reeling by the badness.

Besides the ridiculous plot, the writing was terrible. The author uses dialogue for amazingly long and complex info dumps about history. They are totally inappropriate and out of the blue. It gives me the feeling of one of those failed educational videos or textbooks where they have cartoon characters that “talk” to each other about the subject. For example, this is one of the first conversations she has with the slave boy who finds her washed up on the island. Keep in mind: 17th century. White girl. Black boy. Washed up desert island. First meeting.

“You speak English. Where am I?” I asked.

“Of course I speak English. Back in Africa — before I came here — I worked for the Richards and George company. They export palm oil from Africa. My father and I were employed by them since I was a buhbuh.”

“I speak English and I have never heard the word buhbuh,” I said. “Is it more Gullah?”

“It’s what we speak here. Some words are English; others are from my home in Africa, Sierra Leone, and other nearby places and tribes.”

Oh thank you, nice African slave boy, for explaining the historical reasons and cultural significance of the language I speak in such a textbook fashion.

The behaviour of the characters does not fit the time period as well. It is like the historical setting has been tacked on to a modern day character like a dress on a paper doll (or breasts on a Michelangelo sculpture). There is hardly any detail about the time period- what they wore, what they ate, the social moors of the time. Not to mention the fact that Weyn tries to cram too many different aspects of that society into a slim novel. The witch trials in Massachusetts. Anton van Leeuwenhoek and the microscope. The slave trade in the Carribbean. Tacked on to this a magical plot with demons and angels. The book read like a fifth grade composition: And then the ship sinks. And then I was sold to Reverend Parris. And then… and then the nice Native Indian came and we talked as equals and we all went off into the sunset and lived happily after.

Finally,  though the novel begins with van Leeuwenhoek and the interesting concept of being able to read the minds of cells (called animalcules in the book) this thread is completely dropped. We hear nothing more about it.

After reading this book, I googled the author to see if she was indeed a teenager herself. Perhaps this was a first attempt and I was being too harsh. But no. It turns out she is the author of the Barcode tattoo, a popular science-fiction novel among teens and one that has peaked my interest.  She is a veteran writer and as such should know better.

I give it one star because my daughter liked it (that is why I read it). This book must have had something in it that appealed to her. And when I was retrieving the image from amazon, I noticed that booklist gave it a starred review and Kirkus as well, to my great mystification. It is definitely fast-paced and Weyn does cover a lot of ground.

So maybe I’m wrong. Who knows? Though YA literature is not synonymous with bad literature- there are way too many good YA novels that help disprove that myth, this book does not help the cause.

The sloppy writing, anachronistic characters, slapdash historical details and haphazard plot  make me wonder how it ever got published in the first place, let alone garner good reviews.