Skip to content
I have a new favourite poet. His name is Bruce Taylor.  He was born in 1960. He lived in Montreal for a while and now lives in Wakefield with his family. That’s all I really know. When I googled him, the information on him was as slim as a wheat field after a horde of locusts – a veritable data-less dustbowl. A few reviews, which I don’t want to read before writing this.
So how did I come to know him? It is true I could be a little more vigilant in my pursuit of new poetry. I do try to write the stuff. And I do read the literary journals (well the ones where I get a “free subscription” whenever I submit to one of their contests). Luckily, I have  a friend named Alice who reads more journals than I do and though she keeps insisting she doesn’t know anything about poetry, she does know a lot about reading. She also has the most wonderful habit of ripping out pieces of the literary journals when she sees something one of her friends might like. She scrawls a note to herself on the page, something like, “Lina might like this” and then stuffs it in her purse so they are ready to hand over to the lucky person  when next they meet.
I have recently started a file folder of all the pages she has given me. I love that she does that. And I always read what she has so carefully chosen to give me with great attention.
One of the stacks of ripped out papers contained poems by Bruce Taylor from an issue of ARC. It was the science issue, called Quarc which I think came out last summer. Now, I had never submitted anything to ARC that year and therefore did not receive it. His poems, about the microscopist, Anton Van Leeuwenhoek, were accompanied by illustrations of small creatures. I recollect a lobster. Perhaps a mollusk. The poems were wonderful. The language richly textured, like the feeling of sinking your bare feet into warm sand.
I checked to see if I had any of his books in my library, which for a high school has a quite decent selection of poetry ( I thank my predecessor for that) and lo and behold we had his first two books, Cold Rubber Feet and facts. I randomly picked up facts and was blown away. 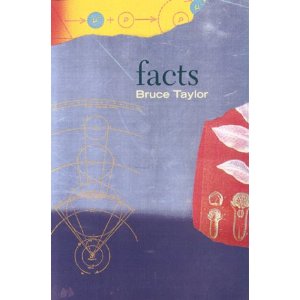 How does he make words do that? How does he make them fit into these compact images, rhyme and meter intact? Because Mr. Taylor is a master of form, or so it seems to my unedumucated brain (I always hesitate to make such grandiose review pronouncements when I feel so daunted by academic analysis). All I know is that meaning, imagery, rhyme and meter are so intricately entwined it is hard to separate them. In fact, it took me several poems even to realise that what was making the cadence, what was helping me trip along from line to line so musically, was rhyme. I just opened the book to a random page and came across the first few lines of his poem, Ancestors:
At the exact moment when the great
ancestors pass away,
the great names slip from the great
cadavers and the bare idea of Cartier
climbs from its floppy riding boots and meat,
grows an asphalt back and gravel feet
and falls across St. Lawrence, dabbing stone
piles in the unhealthy slime; and lo,
two meaningless immensities are joined.
See? See what I mean? The man kills me. A simple idea, elegantly executed, so deeply resonant of Montreal, of the river, then wham! Two meaningless immensities are joined! I imagine the unmovable object and the unstoppable force colliding! A tectonic rendez-vous!
Reading this poem you can feel the cold sludge  lap against your leg, see the ghosts of those ridiculously dressed French men.
A sidenote here: I happened to be reading this book when I saw a facebook prompt claiming that to find out what your sex life would be like in the next year, you had to pick up the book nearest you and turn to page 45. The first line in the book would predict your erotic future for you. So I dutifully turned to page 45 of Bruce Taylor’s facts. The poem is called English Lessons. The first line is, “Thank you, but the meat you sell is old.”
Hmmm. Lesson indeed- never mix facebook and good poetry. It might turn on you…
I am looking forward to reading his earlier work, Cold Rubber Feet, and his most recent release No End in Strangeness.
I will leave you with one more poem, brief but eerily to the point:
Bus Station
Kids are doing things they’re not supposed to.
Sweethearts take the escalator up.
A man with too much hair is getting close to
something in a polystyrene cup.
How painfully that lady walks,
and how oblivious to what she wears.
Somehow she finds the rows of chairs
where Television blooms on stalks.
She feeds a coin to one and stares.
Is it a fact that everybody longs
to do things nobody discusses?
Go, people. Ride away from here in buses.

3 thoughts on “My new Favourite Poet”