Last Friday we had our second edition of our Documentary and Discussion group. The snow was blowing, the pizza took two hours to arrive, but did it quell our  appetite for pertinent polemics?

Though my children greeted the prospect of the evening with a very loud rolling of the eyeballs, they got into it.

The movie we discussed was Play Again:

As you can see from the preview, it is about children and how the amount of time in front of a screen is causing a disconnect with nature. It follows a few kids who spend from about 6 to 15 hours a day in front of a screen. These kids hardly go outside anymore. Their parents enroll them in a camp where they must unplug for a week and experience nature.

How did our kids greet the movie? Well, most of them wanted to go to a camp like that. They thought it looked really cool. What did they think about how much time they spent in front of the screen?
For the most part, they thought they didn’t spend as much time as the kids in the movie. This might be true actually, but only because they come from a certain type of parent who limits screen time and who don’t have cable. 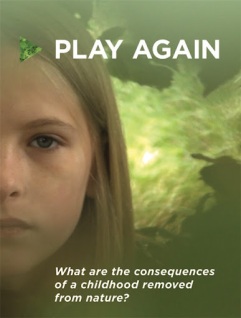 Did you note the smugness, in that last answer? That is how I felt when I was watching the documentary. I was thinking to myself how the kids don’t watch TV during the week. How I limit video games. How my kids are not always on their phones.

But then I counted the amount of screens in their joint bedroom. It amounted to 9. Nine!!!! Two computers, one TV used only for the wii, two DSs, two ipods and two cell phones. And then I began to think about how much time they spend in their rooms without me checking. How on the weekends my daughters can not go outside once, preferring to spend their days in their PJs watching TV. Playing videogames. Then the kicker came when I was exercising and watching a TV show on Saturday morning. The girls were watching with me.  I finally noticed that neither of them were facing the screen but looking down in their laps. They were playing a video game on their ipods while watching the movie.

I have to admit, I kind of freaked out. What have I done? I cried, wringing my hands Doctor Frankenstein style.

Then I thought about how much time I spend in front of a screen, which is all day. That is my job. I am at the computer all day. And at night, I watch about an hour of TV. Sometimes I check my email at home, or do other things. So that makes at least 9 hours of screen time a day for me.

My husband is the same. The first thing he does when he comes home is check his facebook and his email. He also has his iphone which functions as his second brain.

We are online all the time.

And we don’t go outside much.

Oh how I am eating my smugness drenched in humble pie right now.

What was interesting was the kids willingness to try a screen fast (way more than the adults’ enthusiasm for it, let me tell you). They all thought that they could live without it. Perhaps it is time we give it a try….

Other things that came to my mind:

Can we change this? I hope so. I want my daughters to feel more connected to the world. To know where their food comes from. To feel the elation of watching something they planted grow. Or even the calm that comes from a walk in the woods.

But it is winter and the natural world is cold right now. Maybe we will go adventure in April…